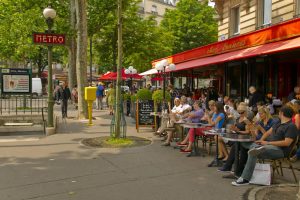 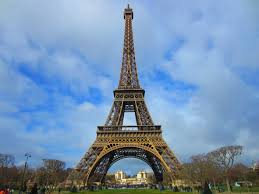 Can you imagine being all of nineteen years old and in Paris for a week with a group of students?  Some have been to Paris before, but most have never left the United States. And from one day to the next, there they are, on the streets of one of the world’s most beautiful cities.

That’s what goes on every year for the lucky students enrolled in the International Media Seminar organised by the  Center for the Study of International Communication, Paris and The School of Media and Public Affairs at The George Washington University. The program allows young people in various participating universities to spend a week in Paris – and what a week.

Looking at their schedule, I see that their first day in Paris consisted of a boat cruise on the Seine, followed by a talk by the Paris Bureau Chief of the New York Times.  The rest of the week they were treated to a veritable who’s who of experts representing important institutions (a sampling includes a conversation with Alan Riding, formerly Chief European Cultural Correspondent and Chief Latin American Correspondent for the New York Times,  a talk by Jim Bittermann, Senior European Correspondent, CNN,  a visit to the influential French daily newspaper Le Monde, lunch with Dominique Moisi, Founding Scholar at the French Institute of International Relations and Professor at Kings College, London – and the list goes on.)

I’m one of those “experts”, having taught journalism at Sciences Po in Paris, written numerous articles on French business, culture and lifestyle for Time and other publications, plus three books on the French (French Toast, French Fried and Joie de Vivre). Add to that dual French-American citizenship and more than forty years of living in France with a French husband and Franco-American children –  which in itself would make me some kind of unofficial specialist in de-coding the French and their ways.

But how to impart all that you have learned in four decades in a one hour speech? In the end, it’s not as daunting as it might seem.  My reasoning is that these young people only really need to know one thing:  the French are different.  I begin my speech by telling them that the French are NOT like the Americans, that the mindset is different, that our educational system and our histories and traditions  are different, that the values we hold, while sometimes similar, are often diametrically different.  The rest of the speech is a veritable catalogue of what those differences are, specifically, and would be much too long to go into here (read my books!).

What I want to impress upon these young minds is that “different” is not bad or good. Different is different!  I tell the visiting students that once they’ve seen a few important sites and museums, they should do something “really French” which is to take a place on the terrace of a café, order a little expresso and watch the people go by. Look at the way people dress, I say.  Look at how engaged they are in theIr conversations.  Look at the hour at which they are having their before dinner drink, at what hour they start going to dinner.  I  tell them to look up as they walk and to note the architectural details of the buildings, to search for the year of construction often engraved in the stone near the entrance door.  I tell them that in France history is in the books, of course, but history is also living,  surrounding you in the streets and the stones and the age-old edifices.

I tell them not to be upset if they feel they’ve been snubbed by a salesperson – Parisians are not known for their amiability (although people frequently contradict me on that and tell me how “nice” the Parisians have become.)

Most of all, I tell these young visitors to shut down their cell phones and open their eyes.  Hemingway called Paris “A Moveable Feast” – it was then, is now, and ever shall be.

But how would you know that if you’re staring at your cell phone?

Take it from me: Paris is one huge visual delight.  There is something to learn in every single street.  After more than forty years in France, I still stumble on something new every day.

I tell them this and one more thing. I tell them that it doesn’t take forty years and that in the short time they are here  I hope that they too will discover many new things – perhaps things that will change their lives  On ne sait jamais.

8 thoughts on “The uniqueness of France and the French”