Rising sun? No, the rising Seine….

Rain, rain, go away. Remember that little ditty we used to sing when children? Well, the rain has not gone away over the past month or two in France and the result, while not as spectacular as in June 2016 when the city was on high alert and objects were carted out of the Louvre for protection, is visible.   Yesterday I walked from my high and dry apartment near the Place Gambetta which is “up” a hill in the northeast of Paris “down” to the banks of the Seine to meet a friend for coffee.  Along the way, I – and hundreds of others – contemplated the rushing, rising waters, hoping they would subside soon  – and for the moment that’s what it’s starting to look like.  Who is hurt most by nature’s rebellion?  The tourists are hurt because they can’t board the magic Bateau Mouche to take a tour and feast their eyes on the city’s monuments from the river. The owners of the Bateaux Mouche  are hurt because they lose money every single day their boats can’t navigate.  Owners of restaurants and shops along the Seine are affected when their basement storage areas are flooded. People who are lucky enough to live on houseboats suddenly wonder just how lucky they are…  So here’s to a bit more “rising sun” in this steadily grey Parisian ambiance and a lot less of the “rising Seine”. 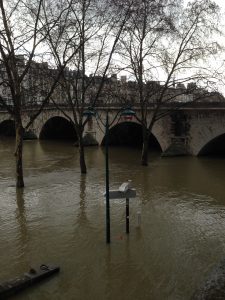 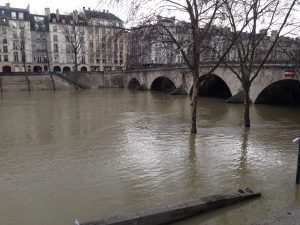 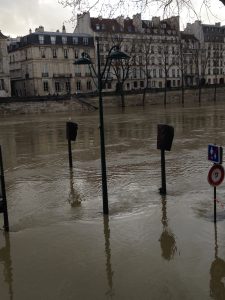 What do a gas station and a notions shop, both in Paris, have in common? There are hardly any of them left! On a recent stroll, I saw, and snapped a picture of, a gas station, thinking it would be nice to have a trace of this part of the Parisian scene which is fast becoming a relic. Why?  There are only one hundred or so gas stations in Paris now! On a different walk on a different day, while accompanying a friend who sews and knits (I do neither, unfortunately) to a “mercerie” (French word for notions shop)I took pictures of another fast disappearing “service”.  This particular notions shop was  located inside a charming courtyard on the Francs-Bourgeois in the trendy Marais.  There used to be hundreds of these little stores all over France. In small villages, they were often tended by a lone woman with a cat to keep her company. In them, you find needles and thread, buttons and ribbons and zippers and bolts of material.  The upscale store in the Marais, my friend told me, is one of the few that remain in Paris. You can still find them though.   Should you find yourself in need of pretty French ribbons or bows, here’s a link to the 84 notions shops  in Paris, classified by neighbourhood:  https://www.yelp.fr/search… 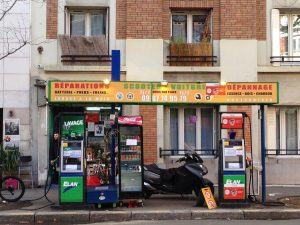 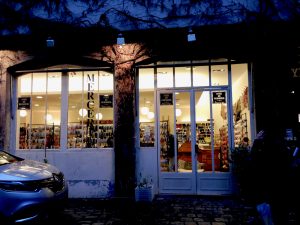 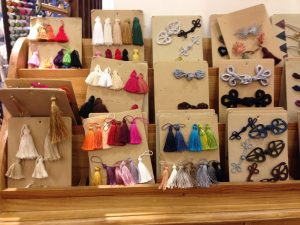 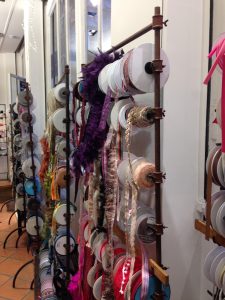 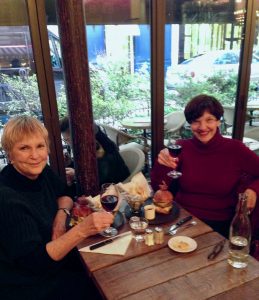 The other day I was in a Parisian restaurant with a longtime friend. We were having a good time and laughing, notably over the fact that we were eating hamburgers. They’re all the rage now in Paris, but we old-timers who have lived here for more than four decades remember when the French didn’t even know what a hamburger was, let alone make or eat them.

In my first book, French Toast, I describe making a hamburger for my traditional French father-in-law back in the 70s. It was a fun idea, but difficult.  In those olden days, there were no hamburger buns so the village baker consented to make a batch especially for me (after I had shown him a picture).   Neither of my in-laws had ever eaten a hamburger.  My belle-mère was intrigued – and my beau-père was horrified, mainly at the idea that you would eat that huge concoction with all its overlapping layers and sauces with your HANDS.  (As a matter of fact, still today, you see French people daintily eating those monsters with knives and forks).

Well, times have certainly changed in France. And not just hamburgers.  In the past, French people looked at each other while they ate. They had animated conversations – or romantic ones. They looked into each other’s eyes.  Now they are more likely to search their iPhone for their mail. They even (but less than Americans, I would say) take pictures of their food to post on Facebook or one of the other social media sites to show to their “followers”.

We did indeed ask the waiter to take a couple of pictures of us with our hamburgers but I didn’t post them on Facebook on purpose. Why?  After watching people (of all nationalities)  in restaurants who superbly ignore their companion (s) while engaging with their phones, I made the firm decision not to follow their (bad) example.

I have decided to be more “in the moment”.  When I’m dining, in a restaurant, whether with a friend or family member, I want to concentrate on our conversation, on looking around me, on savoring the food, the ambiance.  On being where I am.  I want to de-connect my gadgets and re-connect with the food I’m relishing and the person who is with me.  No phone calls while I dine, no looking at email, no searching on Google. 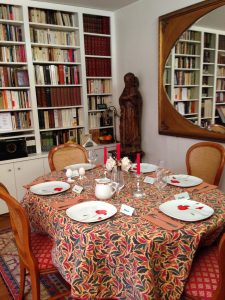 Sunday lunch,  January 7 chez nous –  or “are we really eating all this holiday food again?”. Answer: yes. David, our writer son, and his family couldn’t make it for Christmas so we made up for it  with a late celebration and a sighting of Santa Claus (who made a special trip from the North Pole bearing loads of gifts.)

The picture above is of the  table with no one at it and before it became a total mess. On the menu: foie gras accompanied by Loupiac (sweet white wine, delicious), a tender pork fillet (filet mignon de port) and gratin dauphinois accompanied by a nice bottle of Julienas, a cheese plate with Munster and Reblochon and a galette des Rois.

The fellow in the background is a (formerly painted) wooden 16th century statue of Saint Anthony of Egypt. I remember the first time I saw this saint at my in-law’s apartment in Paris.To say I was intrigued is an understatement.  I don’t know much about saints and didn’t know which St. Anthony it was, and the first thing I learned about him was who he was not.

“Our” saint is not  St. Anthony of Padua, the patron saint of lost items.  He was born in Egypt in about 213 A.D., spent his entire life engaged in a struggle with the Devil and was the founder of Christian monasticism. His popularity reached its height in the Middle Ages; the black-robed Order of Hospitallers in Grenoble (France)  were a familiar sight as they went around collecting alms and were known by their bells and their pigs, which were given a special privilege to run free in the streets. You can’t see it in the photo but there is indeed a bell – and a pig at St. Anthony’s feet.

After Philippe’s parents died, we inherited the saint and he has been in our place ever since. I can’t even imagine what it was like when he wasn’t here. One day, though, I decided he looked sad. Then it occurred to me that when he was hanging on the walls of a church people looked at him from below. So I got down on my knees to see what they saw. His expression was totally different – contemplative but certainly not so sad! 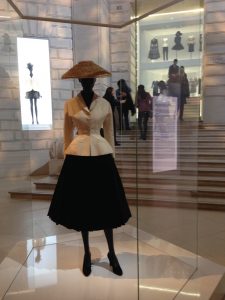 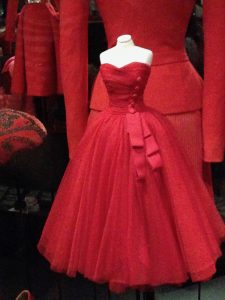 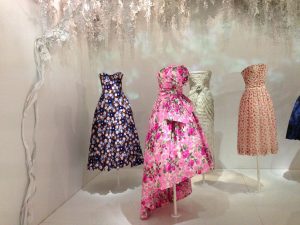 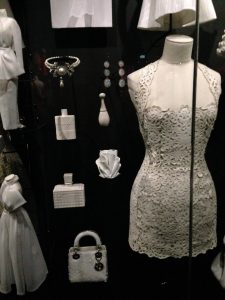 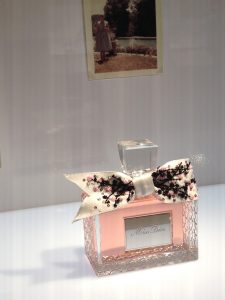 On the windy, sunny last day of 2017 a friend and I attended the Dior retrospective at the Musée des Arts Décoratifs.

It was without a doubt one of the best museum displays I have seen in a long time: informative, complete, well-explained and….magical!

Dior was more than a designer: he was a visionary, an architect, a lover of nature.  His creations,  in the words of Yves Saint Laurent, captured ” post-war insouciance, discreet luxury and stunning beauty.”

As I traveled through the well-appointed exhibition, I found myself gasping at the attention to the cut, the detail, the colour and the combination of conservatism and frivolity.  The creations vary, depending on the designer – first Dior, then Yves Saint Laurent, Marc Bohan, Gianfranco Ferré, John Galliano, Raf Simons, and currently, Maria Grazia Chiuri.  They imprint their own originality but all adhere to the love of and strict standards of haute couture.

Perhaps they had Dior’s words in mind while designing:    “Respect tradition and dare insolence: you cannot have one without the other.”

The show, which ends January 7 and has attracted more than 6000 visitors a day,  is an appropriate and  stunning tribute to one man’s genius and talent and seven decades of the House of Dior.

A beautiful way to end the year!

The photos show Dior’s “New Look” which scandalized traditionalists after the War, an exuberant red gown I’d kill to have,  a collection of flowered motifs (Dior loved gardens and flowers – as a boy, he compulsively consulted garden catalogues), accessories and details in white, and a bottle of Miss Dior, his first perfume which he launched the same year as his fashion house in 1947.