I’d heard the story so many times I was starting to think it was an urban legend among Americans in Paris. 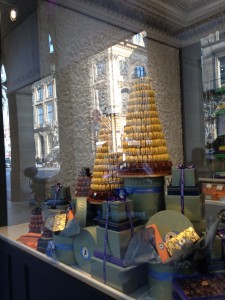 When you walk into the patisserie, say “Bonjour, Madame” !

But the last time I heard it – from a young half-French, half-American fellow – I gave it my full attention.   This was definitely a winner in my collection of cultural differences.

He told me he’d always thought he was more French than American (he was raised by a French mother in the States) but it was confirmed in the metro when he asked an employee what line to take.

Bonjour », the agent replied, looking him in the eyes.

« Bonjour ? » What on earth ?  The young man thought he hadn’t heard correctly.

But the agent, he told me, just stood there, waiting.   He decided to see what would happen when he uttered this obviously important word.

« Bonjour ! » he said, looking at the employee – who smiled and proceeded to answer his question rapidly and efficiently.

The young man went on his way, his thoughts twirling.  Now what was THAT all about ?

Why can’t you just get your information and get out of there ?

The reason is that France is a country where form, how you do things, is as important as content (what you do).  And in the metro, or stores, acknowledging the existence of the person to whom you are addresssing a question is an important matter of form.

I told this to an American friend who guffawed.  « The French can be really rude, «  she said.  « Why should they be such sticklers for polite behavior ? »

It was then that the little light went on.  Americans often tax the French as being rude, snotty, and superior.   But when someone walks up to them, doesn’t even say hello or acknowledge them as a person and asks directions as if they were entitled to the information, well, they consider that person rude.  Works both ways….

Anyway, whatever you do:  say “Bonjour!”