OK, so you’ve been to Paris and seen the Eiffel Tower and the Arch of Triumph and the Seine.  Maybe you’ve hopped down south to the Riviera to check out sunny St. Tropez and Nice.  Some of you may have ventured to the Périgord with its prehistoric caves and foie gras, and to Brittany to enjoy its spectacular ocean views, fresh seafood plates and succulent crêpes.

But have you been to Alsace, in the northeast corner of France?

On a recent trip, I was amazed at my own delight in re-visiting this magical land of lush vineyards whose slopes run right down to the road, fairy-tale villages with brightly coloured houses – and even storks (real ones!) who oversee the towns from their nests on high.  Local specialties are a feast for both the eye and the stomach: they include the Kougelhopf, a prettily shaped brioche made in a colourful mold,  heart-shaped pastries and gingerbread,  and  of course, perfectly made to-die-for choucroute (sauerkraut) served with local charcuterie (also to-die-for). 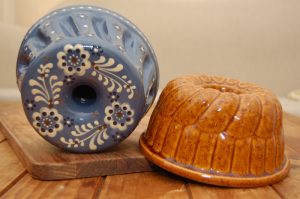 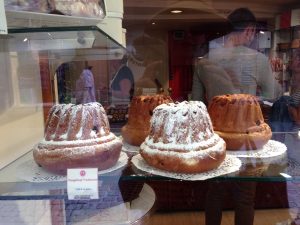 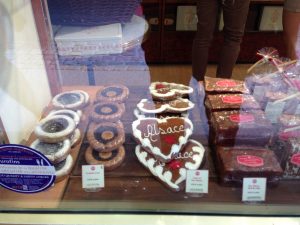 From Paris, It’s easy to get to Strasbourg, the capital of Alsace.  Those of us who endured the  five hour plus ride in the olden days are grateful for the sleek fast trains (French and German) that barrel along at more than 300 kilometres per hour, reducing total trip time to a mere hour and a half.

Strasbourg’s main attraction is the immense, one-spired eleventh century Gothic Notre-Dame Cathedral and its astronomical clock. Fashioned from sandstone, the cathedral takes on different hues, from grey to pink to almost red, depending on the season and the hour of the day.  A friend and I, sitting in front of it at a nearby café savouring a flammekeuche (kind of an Alsatian pizza with cream and munster and bacon on the top), concluded that we could happily remain there all day just to watch the pageant of changing colors. 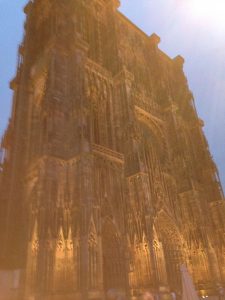 Strasbourg has scores of half-timbered houses, narrow streets, charming canals and a lovely Old City. But it is also  the well-kept up modern home of several European institutions including the European Court of Human Rights and, with Brussels, the European Parliament which holds 12 sessions a year of four days each. And as everywhere else in Alsace, Strasbourg’s streets are clean – and such a contrast to the  litter-strewn ones of Paris.

South of Strasbourg is the well-known and much travelled “route du vin” which features village after village of colourful houses, storks on their high posts, places to taste –  and buy  –  the wonderful wines of Alsace (Riesling, Gewurztraminer, Muscat, Pinot Noir).

Riquewihr, a wine-making town of 2000 inhabitants (and easily ten times that of tourists), is the jewel in the crown.  You are literally stunned as you wander down the cobblestoned streets gawking at the medieval half-timbered houses painted in what some might consider outlandish or garish tones – that somehow work.

To be sure, there are softer hues, such as this green house I love 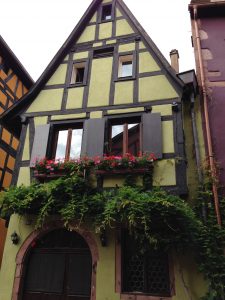 But then we move on to bolder colours, such as this blue and yellow duo side-by-side 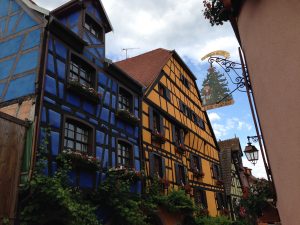 I thought that was probably the height of daring color combinations but saw I was wrong when I came upon the gem below which conjured up images of gingerbread houses, witches, black cats and cobwebs. 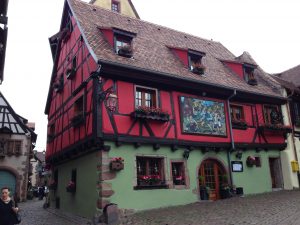 We could barely tear ourselves away from Riquewihr to our final destination:  the town of Colmar and its world-famous Unterlinden Museum. Located in a former 13th century convent, the museum houses the magnificent and moving 16th century Isenheim Altarpiece by Matthias Grunewald. He painted this tableau of the Crucifixion for sufferers of the plague in the nearby monastery of St. Anthony; its powerful message still resonates today. 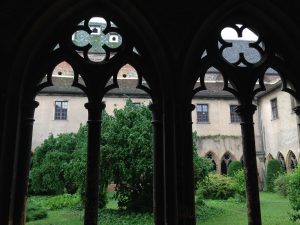 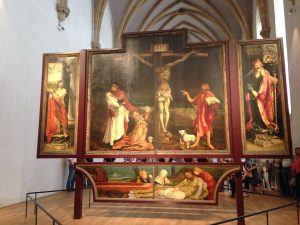 Alsace is a feast in so many ways, in the taste of its traditional food, in the architecture of its houses and churches, in the tranquility of its villages and vineyards.  No wonder Germany coveted it, occupying Alsace from 1870 to 1918 and annexing it in World War II and forcing Alsatian men to enrol in the German Army – they were called “malgré-nous” (in spite of ourselves).  The Alsatian artist Jean-Jacques Waltz, better known as “Uncle Hansi”,  illustrated books showing typically dressed Alsatian children in a pro-French happy Alsace. (note the French flag planted in the soil of the vase with the cardboard cutout of an Alsatian boy).   Hansi was captured by the Gestapo in 1941 and beaten so badly he was left for dead. (He survived and died after the war in Colmar). 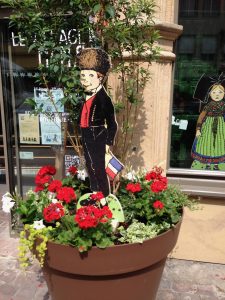 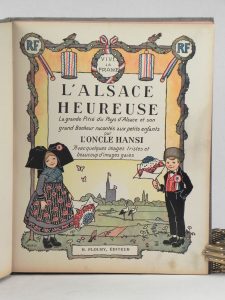 The Alsatians speak a German dialect, but don’t think (or tell them) they’re speaking German. That’s an insult.  They are fiercely proud of their region, fiercely proud to be Alsatian. They even refer to the French people who don’t live in Alsace as “les Français de l’intérieur” (the French of the interior).

I imagine it might be hard to fit into their culture if you aren’t born into it, but it’s not hard at all to take a little trip and admire this thoroughly admirable part of France.

8 thoughts on “Harriet in Wonderland”