So the deed is done.  Prince Harry has married his beautiful, bi-racial, feminist American sweetheart and I’m here to say that I witnessed their tying the knot – even if it was on French TV with French being spoken over the English.  So terribly weird!

Of course, being a sentimental type, I, like Meghan’s mother and many others, spent a lot of the ceremony with tears in my eyes.  What could be more beautiful, more touching, more dreamlike than the enactment of a fairytale? How wonderful for Harry to have found the woman of his life – a compassionate, outgoing, nonconformist, modern woman who brings to mind his late mother, Princess Diana.

Yes, I’m happy for Meghan and Harry – but a little worried as well.

“I’m American. I Hug” was the headline of this morning’s front page article in the international edition of the New York Times. It  dealt with the (painful to some, especially in the monarchy -and welcome to others who aren’t) fact that Meghan is a hugger.

So, big deal, you’ll say.  All Americans are huggers.

And therein lies the problem.

Having lived abroad for more than forty years, I know for a fact that when not on home ground you’ve got to make compromises – every day and all the time.

Europeans, especially the reserved English,  do not hug each other.   The Spanish greet each other one way, the Polish another, the Italians yet another.

In France,  the bise  is the way you greet a friend and it’s not as easy as it looks. You lightly graze the cheek of the receiver twice (in Paris) and three and even four times in the provinces.  There are some people to whom you would never give a bise  (your boss, your kid’s teacher, someone you have just been introduced to) but of course, you, the foreigner, have to figure this out by watching people and making the effort to learn.

I try to imagine what would have happened if I had said “I’m American. I Hug” in France.   It’s almost an act of war!  It means, “I’ll do things my way. I’m superior. America is superior. Why would I bother to do what you guys do?”  My French family and friends would have been stupefied had I grabbed them and hugged them.  They don’t understand the hug anymore than I understood the bise in the beginning.

But I learned. You know why? Because I was living in their country. If I wanted to do things my way, I would have stayed in my country.

It’s good that Meghan brings a new perspective to the stilted and stuffy monarchy. If she feels like hugging an adorable little girl or a charity worker for the homeless (pictures below) from time to time, well, why not?

But the Palace Guards? Please, Meghan. You’re no longer in California.   Good luck! 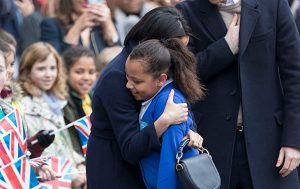 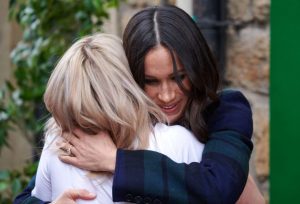 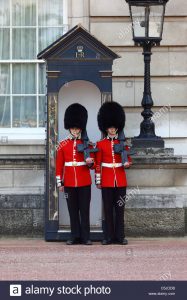