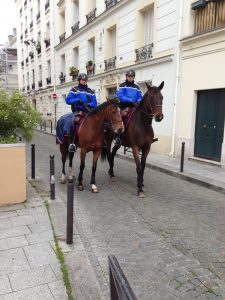 I love the 5th arrondissement of Paris.   When I arrived in Paris in my early twenties, I discovered the rue Mouffetard, one of the oldest market streets in Paris. I rented a small studio with a toilet on the landing – and in spite of that inconvenience thought I’d died and gone to heaven.  I loved leaning out my sole window on the third floor to sniff the smells of the market and rejoice in the noise and the hustle and bustle and the cries of the vendors as they  rushed to place their stalls and their wares.

Years and years have passed since then. I’ve gone from being a carefree, adventurous twenty- something-year-old single woman to being a I-won’t-tell-you-how-old grandmother!  I’ve lived in other spots in Paris  – the upscale 16th and Neuilly where we practically lived in the Bois de Boulogne and now the 20th, near the Père Lachaise cemetery.

I still love the 5th best of all.

As a matter or fact, it took me a long time to bid good-bye to the 5th. After I left the rue Mouffetard, I moved up the street, first to the rue Descartes and then to the rue de l’Ecole Polytechnique;  I married my French husband at the “Mairie” of the 5th arrondissement right across the street from the Pantheon;  after he retired, my husband got his doctoral degree in History at the Sorbonne.

Maybe one reason my husband and I both like the 5th so much is that it is filled with great institutions of learning – the Sorbonne, of course, but also Le Collège de France and L’Ecole Normale Supérieure.  Unlike certain parts of Paris, the 5th doesn’t put on airs but is comfortable just being itself. And while it’s lively, sometimes, rather eerily, you’ll find yourself on a street that is as quiet is if you were in the country.  The picture above of the officers on horseback was taken on Easter Monday when my husband and I were walking down the rue Aymot,  not far from the Place de la Contrescarpe and the Institut Curie. There was not a soul or a sound – until a clip clop, clip clop reached our ears.    We turned to look and voilà in our line of vision,  two handsome horses mounted by officers of the Gendarmerie Nationale who kindly stopped to pose for the picture before moving on at a leisurely pace. 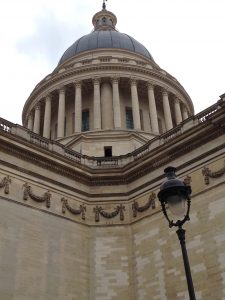 We continued our stroll until we reached the Place de Pantheon.  With its impressive dome and intricately decorated Corinthian columns, this beloved neoClassical monument modelled after the Pantheon of Rome is the collective resting place of France’s greatest men and women from Victor Hugo and Alexandre Dumas to Geneviève de Gaulle-Anthonioz and Simone Veil. On its pediment you’ll see the motto:  aux grands hommes la patrie reconnaissante  (to the great men, the gratitude of the country).    Hard to change the writing on a pediment but, as mentioned, the Pantheon is home to the remains of some of France’s greatest women as well as men.  A stately building, it dominates one of the most beautiful “places” in Paris. With your back to its front, you look straight down to the Luxembourg Garden. Facing it, you see behind it on the left the ancient Eglise Sainte-Genevieve.  It is a very special historic place in the heart of the city.

Imagine my consternation, then, when I spied a series of ugly horizontal blocks on either side of the monument making the entire esplanade look like a work site.  I couldn’t figure out what they were or imagine they could be “benches”  – but they are, just as the platforms of wooden slats are a place for skateboarders or budding actors to declaim their texts.   What a scandalous shame, I thought, and laughed when I saw that some impish soul had placed a mask on the nose of the statue of the famous 17th century French dramatist and tragedian Pierre Corneille.  I imagined him saying “this new idea stinks”! Or “speaking of tragedies” ! 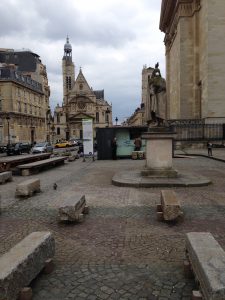 A planned tragedy, at that.  As you’ll see on the sign below which explains the desecration,  the benches are  part of a comprehensive project of the City of Paris and its Mayor Anne Hidalgo to make several Paris “places” more user friendly. The idea, I can only assume, is that all these boring age-old “places” should be fun-filled.   That means smoking and eating sandwiches and skate boarding and sitting back and relaxing on the backless granite benches (if you can relax on a backless bench) instead of doing what people used to do which was take a stroll, stop in front of the monument, appreciate its beauty while standing and move on. The idea is to “re-invent” the places mentioned in the poster. 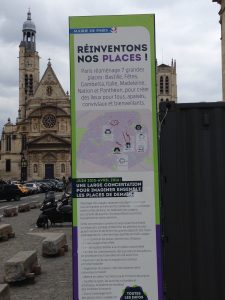 I’ve got a better idea.  Just leave them alone.  Give people a chance to enjoy beauty without the noise of skateboards, music blaring from earphones, constant flap and flutter.

If there’s silence, they might even hear the surprising sound of horses hooves!