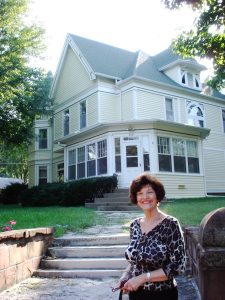 In today’s Joie de Vivre post, I’ll be talking not about France, but about America, and the joie de vivre  I experienced growing up in an historic home n Shenandoah, Iowa.   Built in 1895, it was and is beautiful and spacious, elegant on the outside with a wraparound enclosed porch and a turret, and on the inside with thick oak doors, a highly polished wooden staircase with newel post, stained glass windows and two living rooms, one upstairs, one downstairs, both with fireplaces.

I associate the house with my “roots”:  I am the sixth generation of the Welty family in Shenandoah which began with Samuel Welty in 1855.  Most of our family lived on farms outside Shenandoah and my father was the first to buy a home “in town”.  When he bought it in 1948 from the original owner, I was 3.  I thought it was a family myth but my sister recently confirmed that the place was so big that on moving day I got lost!

The house was the center of my universe.  In fact, as I started thinking about our home on Center Street, I realised that I lived in the center of the country on Center Street, attended Central School (now unfortunately torn down), married a Frenchman who attended “Ecole Centrale” (also Central School) and whose family hailed from the Massif Central in the center of France.  Plus,  the house was central to my love of architecture and old homes and support of preservation efforts everywhere in the world.

Recently  “our” home, which I lived in until the age of  23, was  featured in our local newspaper,  and I was thrilled to see that the present owners have kept it up beautifully.  You’ll find a written description of the house’s amenities in the well-written account of it in the Valley News.  http://www.valleynewstoday.com/news/historic-homes-ron-and-kris-larock/article_b259a6e4-faad-11e6-ad7e-b73969b064fb.html?utm_medium=social&utm_source=email&utm_campaign=user-share

I have visited Shenandoah several times and have always gone to see the house – from the outside.  Sometimes friends are surprised when I say that I never wish to go inside and that even if I were invited, I would not.  Why?  A house like that has a spirit of its own.  It warmly wraps a family inside it.  I will leave it to the present owners to enjoy their turn as custodians of this very special place.

Even today, even after having lived in France for more years than I lived in the States, I can and often do take a mental tour of it, traveling from room to room.  I remember the wallpaper in many of the rooms, the smell of the cedar closet off the upstairs living room,  my cozy  bedroom under the eaves, our family’s sit down dinners around the table in the dining room (where there was even a bell for servants in the floor under the table – no servants, though), the creepy basement and scary attic, the gatherings of friends around the grand piano, nights chatting lazily with friends on the front porch.

The house is no longer “mine” but I carry its beauty and  warmth wherever I go.

8 thoughts on “An historic American home – mine”