The day after Trump’s inauguration Philippe and I took the metro to the Place de Trocadero to join the Women’s March in Paris. It was a joyous hodgepodge of young and old, women and men, Americans and French and a sprinkling of other nationalities.    I was standing there holding my poster before the march began when a French man came up to me and asked the following question:  “Why is your poster only in English?  You are in France!”

“Yes,” he huffed, looking at my uncomprehending face.  “France is not an American colony.”  And having delivered his parting shot, off he went, leaving me stupefied.

It was obvious, at least to me, that since the protest was about Trump and since most of the participants were Americans, the posters would be in English.  Non?

But the fellow’s comment got me thinking:  Am I a nasty American imperialist, one of those people who doesn’t give a fig about the country she is in? You know the kind of people I’m talking about. They are the ones who wouldn’t consider learning the French or Spanish or Italian word for “hello” or “thank you” when in France, Spain or Italy. They figure that everyone in the world speaks – or should speak – English just like them.

This being said, as far as the Paris march is concerned, I can understand why the majority of posters were in English. Many of the American participants were visiting Paris, passing through.  Others  may live in France but don’t speak or write French for whatever reason.  But what about people like me who live in France permanently and speak and write French with no problem?

I had to ask myself why the thought of making a bilingual poster never even crossed my mind.

The answer is simple: I figured it was an American protest against an American President.  That’s basically true.  However,  I didn’t take into account where I was – in France, walking down French streets, showing a poster that would be read not only by other Americans, but by the French who just happen to live in this country!  The harm Trump can and will do affects the entire world, including the French. They too are the victims of this election.  So they should at least be able to read my sign!

OK, I was culturally insensitive which is rather ironic for someone who has written three books on the subject of being culturally sensitive.  A slap on the wrist to me!

And a  little reminder to all Americans abroad: keep in mind that a little courtoisie goes a long way.  Now that we’ve got Trump, we need as many ambassadors on the ground as we can get. 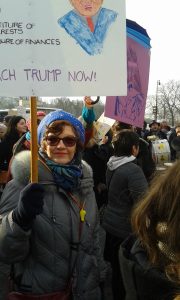 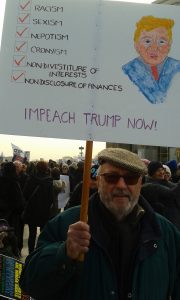 8 thoughts on “A little bit of courtoisie, s’il vous plaît”