Some Memories of  “Don’t Eat Your Soup With A Fork”

40 years have passed since an irreverent, fun and sassy publication called The Paris Metro hit town.  Tonight, in Paris, the founders of and contributors to that very special magazine, which unfortunately died after only two years and 64 issues,  will be celebrating its 40th anniversary, starting in fine style with a champagne cocktail at the emblematic Tour d’Argent.  For the commemorative booklet put together for the occasion, contributers were asked to write long or short pieces about Paris in  the 70s and personal memories of The Paris Metro.  I was flattered to be included:   I only wrote one article for the magazine.  But that piece was priceless, for me at least.    Below are my reflections on “Don’t Eat Your Soup With A Fork” and how it inspired me as a writer.

(The Paris Metro 40th Anniversary book edited by Patsi Benter Krakoff and Joel Stratte-McClure is on sale at amazon.com).

Let’s see….got to situate this. Paris Metro ? The magazine, not the underground. That was eons ago. Can I even remember it ?

Of course I can !

And better than that. I am sitting here in my home office in Paris looking at a photocopy of a long feature I wrote for Paris Metro called « Don’t Eat Your Soup With A Fork ». It was even illustrated with four delightful drawings, one of which showed a well-dressed man manipulating a giant lettuce leaf that sprang up in his face, spattering vinaigrette all over his clothes, the tablecloth and his terrified tablemates. (That was to illustrate my point about how a good hostess should always cut lettuce into bite-sized portions).

I can’t remember who had the idea for an article about French politesse but I do remember that the editor had a concrete suggestion about who to contact. The name he gave me was Princess Beris Kandaouroff. She was an Englishwoman who had penned « The Art of Living-Etiquette for the Permissive Age ». I duly trekked over to her apartment, somewhere in the 9th arrondissement as I recall, where she cheerfully proceeded to give me a crash course on what to do and not to do in France if you want to abide by the rules. Ca se fait and ça ne se fait pas are things most French instinctively know but we poor foreigners don’t, hence the necessity of books,articles and general instruction on the subject.

Most of the rules concern dining which, in a country obsessed with food, is no surprise, and my article went on and on about all the horrible faux pas one could unwittingly commit at a formal dinner party if not in the know. Offer carnations ? Never – they bring bad luck. Sop up that delicious sauce with your bread or a fork ? Neither. Don’t sop it up at all when dining out.

And those two bits of advice are only for starters.

I was amazed by all the things one should and shouldn’t do. The Princess advised guests never to show up at a dinner party with spare friends or animals unless asking permission from the hostess beforehand. To illustrate her point, she told me that she once invited the director of a zoo to dinner and he came with a lion, causing pandemonium. Re-reading that today, I wonder if it was the whole truth. (Time magazine, where I was a stringer in the Paris bureau for many years, would have got a fact checker on it). Anyway, it was a great story and that’s what counts.

I didn’t know it at the time but I would dine out (pardon the pun) on that article and that subject for decades.   The article led me to consider French behavior in general which led to my first book, French Toast, followed by two others, also on the arcane and mysterious ways of the French.

Had the Paris Metro editor not given me such a bigger than life source to interview, nor encouraged me to write fresh and funny, that article would have been an end rather than a beginning. As it was, I found a subject and a style.

In sum, Paris Metro was a bright spot in my freelance life, with all its ups and downs, the details of which I will kindly spare you.

There’s only one down side to this story: when Paris Metro was liquidated, I was formally informed that I would be eligible for chomage (unemployment).. Being a bull-headed American, I didn’t bother. How wrong I was. I dined out on « politesse » for years – and in this Socialist country could have been on unemployment for years as well had I cared to pursue the matter.

Well, we all make mistakes. No little regular unemployment checks and other goodies for me. But what I got was not so bad: writing for a publication the likes of which Paris has never seen again, dealing with editors who had great ideas and a great sense of fun, learning to take myself seriously as a writer whose words could make a difference even if they were only to make the reader laugh. That’s already a lot.

And so the 70s passed, Paris Metro went under as so many wonderful publications did, I stayed in Paris freelancing and never left.

Sometimes when you look back on past events or past places or past experiences, everything seems so much better – even if it probably wasn’t.

In the case of Paris Metro, in my experience at least, it really was just as good as it seemed then. The proof : its successors never made the cut, never even got close.

Someone really should get Paris Metro going again….But that’s another story. 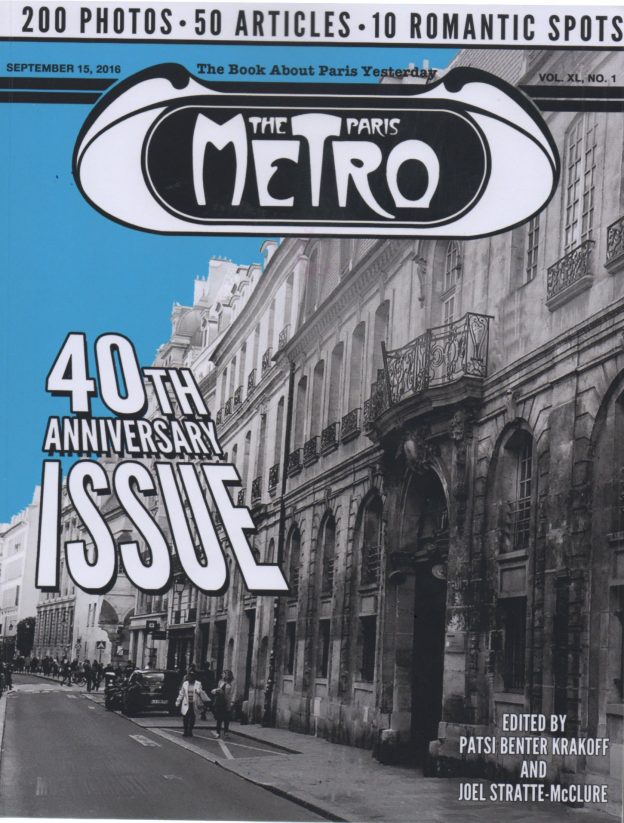