This Joie de Vivre blog has been silent for months.  Pardonnez-moi!

The reason is that in Fall 2013 I embarked on an action-filled book tour in the States for more than a month, traveling from big cities to small (think Chicago, Seattle, then Shenandoah, Iowa,  my hometown, Joplin, Mo.  and Knoxville, Tennessee to name but a few) – and it always takes me a long time to get back in the saddle, digest my travels, and move on.  It took me even longer because during the Christmas holidays Philippe and I decided to celebrate his newly acquired doctoral degree (from the Sorbonne in History with highest honors) with a richly deserved vacation in Mauritius and the French island of La Réunion. See photo below! 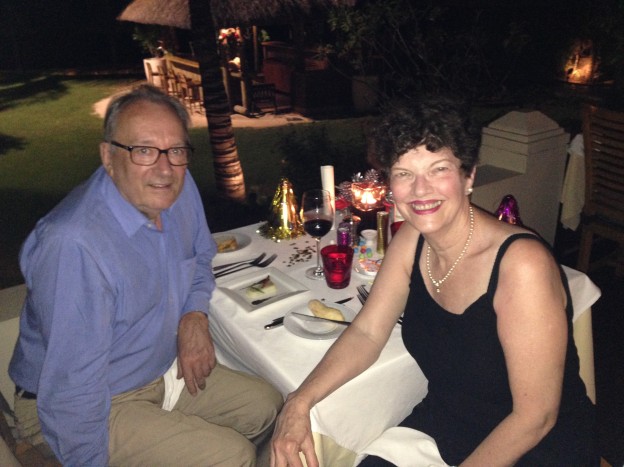 So, albeit belatedly, a few quick thoughts on the U.S. trip and a confession:  After living in France (one could also say “Europe”) for so long, I am flabbergasted by how generous my fellow Americans are with their time and how easily things get done!  (France is a wonderful place but things do tend to get complicated). Many of the people I visited and stayed with along the way were old friends but some were new.  In both cases they cheerfully drove me from place to place, made me comfort meals or took me out to eat, got me and/or took me to the airport, and bent over backwards to facilitate my every move.  One friend gave me her own spacious room to sleep in while she trekked upstairs to her smaller guest room, yet another actually ended up shlepping and selling my books.  In LA I spoke at an event at Vromans held in conjunction with the Alliance Française of Pasadena, in Seattle a friend threw a momentous book party for me at which we sold more than sixty books.  In Knoxville, Tennessee, a friend arranged for me to be the keynote speaker at a Writers Guild fundraiser and sell my books. The event was held in a boutique horse farm and at it I learned what Southern hospitality means.  Such gentility!  I could go on and on because everywhere I went people were gracious, welcoming, efficient and fun.   I mentioned friends but family pitched in too – my brother Ward Welty in Huntsville, Alabama and wife Jane threw a book party for me and ferried me to appearances in  Knoxville and Birmingham. As I told them, I only come to stay with them once every ten years or so but when I do, watch out!  They gamely met the challenge and probably collapsed with relief after my departure!

When traveling around like I did, it’s not easy to take the pulse of the country other than to observe the patent rift between the Republicans and the Democrats.  I don’t choose my friends by their politics so some are on on the left, some on the right.  Let’s just put it this way: If they’re too far on the right, we don’t talk politics.   If I lived in the States, which I no longer do, I would probably end up taking sides.  From a distance, it’s easier to de-dramatize, n’est-ce pas?

Frankly, since I live permanently in France, I am more prone to worry about what’s going on here.  No longer a tourist, I hold a French passport and can even vote in French elections. And pay French taxes.  What French politicians do affects me directly so I have to pay attention.  Which I do.

So here goes:   Unless you’ve been living under a rock, you’ve heard all about President François Hollande’s philandering and break-up with his now ex-companion Valerie Trierweiler.  That kind of stuff is exciting and fun for the press to report on. What’s less glamorous but much more troubling is the current “ambiance” caused by a rift between the governing Socialist party and those who don’t agree with their actions (gay marriage and the introduction of courses on sexual equality in grade school) or methods.  Demonstrations and debates have ensued, but both are now firmly in place.  And who gets blamed for these societal changes? Hold on to your hats while I give you a couple of recent examples of “conversations” I heard in line in a big Parisian department store where I was lined up at the cash register to buy some clothes.

In the first incident, a cashier kindly offered to help out a woman who had a problem that apparently couldn’t be solved by the cashier in whose line she was standing.  “Come on over here and I’ll help you get this settled” she said and so the lady, an Arab wearing a head scarf, did and all was well.  Except it wasn’t.  A dumpy dumpling looking grey-haired woman in front of me yelled at the cashier:   “I’ve got a train to catch. Why are you taking her instead of me?” So far, this is normal behavior in a line – people in Paris are always yelling for one reason or another.  However, she didn’t stop there.    “And why are you helping an “étranger“?  she queried, and in a fit of impatience, threw her purchases down and trounced out.  Fortunately, the reaction was one of horror from the cashier and my fellow sufferers in the line which means that not everyone subscribes to this line of thought.

A couple of days later I was in the same store and this time a black guy got impatient, raising his voice to say to the person being waited on “You’re not the only one in the store”.  A lady standing next to me shook her head disapprovingly and, pointing to the black guy, said:  “Ah, all these “étrangers“.  That’s what we get for voting in a Socialist government.”  I wanted to tell her that  (a) if she thought that the only impolite and rushed people in France were nonFrench she should have another think  and (b) that I am an étranger too but she knew that from my accent and it didn’t count because I wasn’t black or Arab – but by this time I had only one idea which was to get out of that store.

Don’t get me wrong:  I don’t mean to contrast the “nice Americans” with the “mean racist French” in what I wrote above.  Each society has people who think that there are too many “foreigners” and blame whatever’s wrong in the country (in the case of France, high unemployment would head the list).  What I’ve remarked lately though is that while people used to dump on these foreigners in private, now they are doing it in public.  Their private racist thoughts are now out in the open!  Maybe that’s a good thing.  You can’t refute an argument unless it’s out there – and is it ever out there these days.

How will all this strife come out in the wash?  At the polls.  It will be interesting to see how the French vote in the coming municipal elections.  Will the extreme right gain votes in a landslide?   I wish I knew and I hope for France that the divisiveness will cool down or come to an end – just as I hope it will in the States. Looks like I’m an incorrigible optimist!

In the meantime, I find plenty of reasons to retain my joie de vivre and simply wish that all those people who blame the foreigners (les étrangers) for their unhappiness would as well. Don’t you?

6 thoughts on “A U.S. trip and a French freak out”