Oh, I was so proud of myself (not that I’d been dieting-the loss was mainly due, I think, to a bout of stomach flu which turned out to have some unexpected side benefits).

Proud of myself until the chouquettes came along.  It was my husband’s idea:  he’s always ready for a sweet and brought home an adorable little white sack from the bakery filled with the little devils. How could I resist? 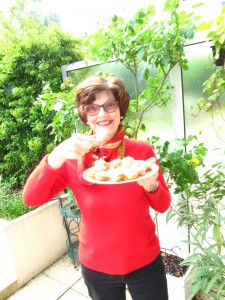 Wikipedia describes them like this:  A chouquette is a type of viennoiserie consisting of a small portion of choux pastry sprinkled with pearl sugar and sometimes filled with custard or mousse. A chouquette can also be dipped in chocolate or covered in chocolate chips. The chouquette did not originate in a specific region of France.

I prefer the plain variety with that tantalizing pearl sugar and no filling.  The best chouquettes are neither crisp nor mushy. They’re light and sugary and airy (and you can always fool yourself by thinking that they are somehow less caloric because not filled) and in my book, worth every calorie.

Philippe and I contemplated our 100 grams of chouquettes, which made about twelve, and rapidly got down to the none too tedious business of scarfing them up.  To our credit, we saved four for the goûter, the French afternoon snack.

Do I make my own chouquettes?  Good heavens, no!  That would ruin the fun of going to the local bakeries and finding out which ones have them.  For some odd reason, some bakeries have them every day, others only on certain days.  My favorite patisserie on the rue des Pyrenees, Gana, run by the daughters of Bernard Ganachaud, the originator of the delicious flute Gana, only makes them on Wednesdays and Fridays.  The waiting, the deferral of pleasure, only makes them better.

Chouquettes for me are emblematic of what I write about in my chapter “Small is Good: Les Petits Plaisirs” in Joie de Vivre:  “In France, small things procure big joys…Small is good.”

David Lebovitz wrote about chouquettes and shared his recipe with chocolate chips (but, word from The Purist, try them without).